The surfaces of plain bearings are typically coated with babbitt, a soft white metal that provides a durable, low-friction surface capable of withstanding cyclic loading. Flame spraying remains a popular method of depositing babbitt for these applications. Here, we take a closer look at the properties of babbitt, and why flame spraying is particularly well-suited to depositing it.

Development and Application of Babbitt

The original babbitt alloy was developed by American inventor Isaac Babbitt in 1839. This was a soft, white tin-based alloy that exhibited very low friction and good corrosion resistance, making it perfect for use in engine bearings. Since then, a number of similar low-friction alloys have been developed, which are also commonly referred to as “babbitt”. Thanks to flame spraying, babbitt alloys can be easily deposited, lending them to widespread industrial use.

Plain bearings are very widely used, especially in crankshafts and crank rod bearings on vehicle engines. Typically, they are cylindrical and formed from two pieces, each known as a “shell” or “bearing frame”. Bearing frames are usually made of steel, cast iron or copper alloys. Since the inner wall of the cylinder houses a shaft, this surface is coated with babbitt – usually via flame spraying – in order to provide a smooth, durable and low-friction surface for the shaft to slide against.

Isaac Babbitt disclosed his original specification for babbitt in a US patent: it consisted of “50 parts of tin, five of antimony, and one of copper”. Babbitt alloy is, perhaps surprisingly, very soft: it can be easily scratched and cut with a chisel. However, it exhibits highly desirable mechanical properties due to its microstructural composition.

Though the microstructure of the alloy would not have been known to Mr. Babbitt, we now know that babbitt metal is actually a composite material consisting of small hard crystals dispersed throughout a soft metal matrix. As the alloy wears during use, the softer metal erodes, enabling the hard crystals to act as load-bearing elements while creating paths for lubricant between them.

Today, a number of different babbitt alloy grades have been developed and specified by the ASTM. Babbitt alloys are tin- or lead-based, with varying proportions of copper, antimony and/or arsenic. 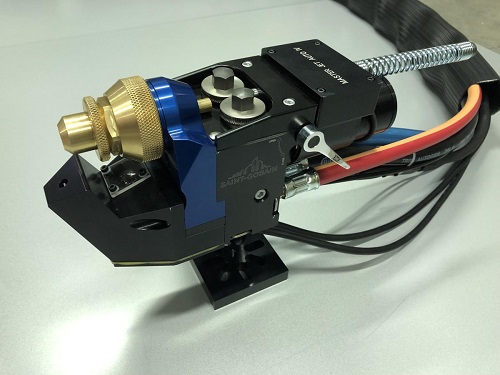 Babbitt alloys are commonly deposited on bearing shells via flame spraying. Flame spraying is one of the oldest and simplest thermal spray techniques, where the combustion of acetylene or propane gas in oxygen heats a deposition material, and compressed air sprays it towards a substrate to coat it. Flame spraying is well-suited to babbitt deposition, offering excellent process control, low levels of oxidation, and the ability to provide dense coatings for demanding applications. As well as simplicity of use, flame spraying also offers much lower capital costs than other spray methods, meaning it is often the most economical choice for thermal spraying.

Flame spraying is suitable for babbitt deposition on cast iron, steel, bronze, and other materials. For these applications, babbitt is typically provided in wire form, such as SG 120 Babbitt #2 thermal spray wire.

From babbitt alloy thermal spray wire to flame spray equipment, Saint-Gobain provides a full range of high-performance equipment and materials for all coatings applications. All our flame spray guns are compatible with babbitt spraying, with the lightweight Z-Jet and the versatile Top Jet being especially optimal. To find out more about our coating solutions, contact a member of the Saint-Gobain team today.